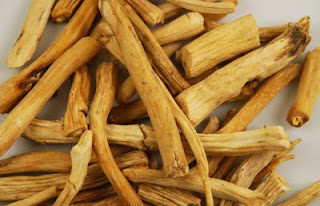 Shatavari Root- is an Herb for women, Shatavari is a traditional Ayurvedic antispasmodic; an aphrodisiac, demulcent (a soothing agent), digestive aid, diuretic, galactogogue (lactation promoter), and is often used for infertility and for women’s health.

Since shatavari works well as a mild diuretic, women take shatavari to help aid in removing excess water weight during menstrual periods.With its ability to cleanse and nourish the female reproductive system, shatavari also has the ability to balance pH levels in the vagina. Dry membranes in the vagina can also be brought into balance, as it is believed to bring all of the body's fluids into balance. Shatavari is also used for digestion, It is said to be effective against colitis and heartburn.

Side Effects: While, it is normally found to be safe in humans, there are possibilities of shatavari side effects. This include allergic reactions. This side effect of shatavari is generally seen in people, who are allergic to asparagus. Its use during pregnancy and breastfeeding is still a disputed subject. So shatavari is not recommended for such women. People with kidney disorders and edema must avoid use of this herb. Some people may experience dizziness and fatigue, as they use shatavari. According to some health experts, shatavari should be avoided by women having massive fibrocystic breasts and estrogen induced disorders.

Pregnant or Breast feeding mom's should always consult with their physician before using any medicine whether natural or synthetic.
Posted by WellScriptllc.com Kalandra Cooke-Goff, PhD | WellScriptllc.com | (313) 522-0085 at 12:41 PM