Premarin & Prempro Users...What are You Taking???" 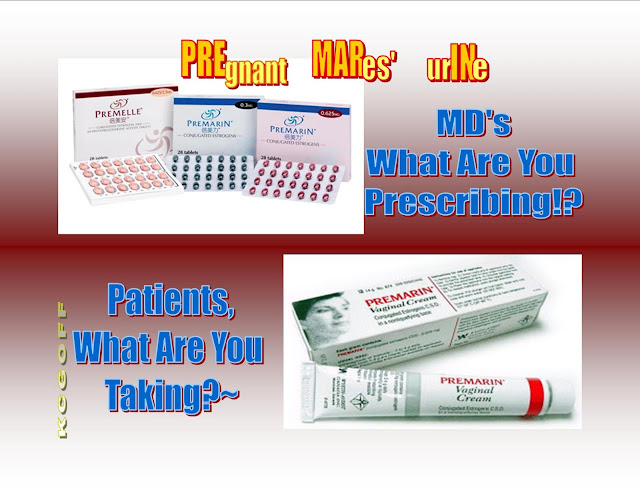 “Premarin (Conjugated Estrogens) and Prempro” (Conjugated Estrogens/ Medroxyprogesterone) which is used to treat menopausal women and used as replacement therapy in other conditions of inadequate estrogen production. The Conjugated estrogens are extracted from the urine of pregnant horses. This is a real health risk to humans and equally inhumane to the mares and their foals.

In 1975 research started on this particular drug concluding with an ample of findings that put women at risk for endometrial cancer. Thereafter, the pharmaceutical companies which carried Premarin and Prempro started declaring risk warning labels of the drug. The National Institute of Health sponsored a clinical trial study that showed a large scale of Hormone Replacement Therapy; progestin and estrogen, may increase the risk of strokes, heart attacks, blood clots, and breast cancer.

Following this study, the pharmaceutical company “Wyeth” sales of Premarin and Prempro fell from 2 billion to 1 billion dollars in sales during 2002-2006. During the years of 2002-2009, 13,000 law suits had been filed against Wyeth. Many of the suits did not succeed due to plaintiff dismissals, ruling by judges, and verdicts by juries. But it still does not alleviate negligence on these companies part. In 2006, a Ms. Mary Daniels was awarded $1.5 million for damages. In 2007, there were 3 cases against Wyeth which was also awarded $17-$19 million apiece for their damages.

Other controversies surrounded Premarin and Prempro; which was from animal activist groups. Grievances were stated in the inhumane treatment during the pregnancies of mares and the undue stress that it places on them when extracting and provoking the urine. Accusations range from continuous breeding cycles, which sometimes resulted in the death of thousands of mares and their babies. The mares being stabled six months out of the year once impregnated. These mares are also restrained with plastic urine collection bags which cause skin irritations and infections as well as causing limited movement.

These farms have been in existence since 1942, and within these times there were huge masses of breeding (More pregnancies meant more urine and more money). There had become an over population of foal. Many of the foals were unwanted and sent to slaughter. As the turn of the century progressed, pharmaceutical companies cut back on the need for large doses of mare urine and thought that less was safer which cause for downsizing.

There are other uses for Premarin and some of those are for treatment associated with metastatic breast cancer in both men and women, prostate cancer in men, it’s also used for individuals who lack the production of estrogen.

In closing, when we are considering sponsoring, investing, prescribing or using pharmaceutical; we must know exactly who these companies are and find out as much detail as we can possibly can about them and their products, foremost the ingredients. If we join them, we will be accountable in the sight of God, just as they will be accountable.