"The Faces of Hypomania" 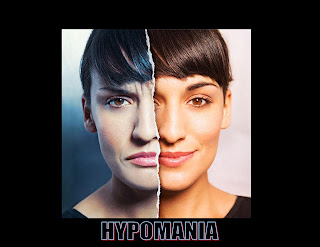 The Neurotic Disorder of Hypomania, I have found to be very interesting, due to its symptoms. Hypomania is different from most depressive disorders; as it presents itself as a mood disorder. Most people who deals with Hypomania, is characterized by a persistent and pervasive elated or irritable mood, Inflated self-esteem, increased talkativeness, increased activity, decreased need for sleep, grandiosity, racing thoughts, excessive involvement in pleasurable activities despite possible consequences, and an increase in goal-directed activity which makes it difficult to diagnose. This mood disorder is more so noticeable by others and is not considered to be a diagnosis unless three to four of the symptoms above appears. The episodes of hypomania usually do not present problems in family, work, or the social life.

Although; people with Hypomania is at most times cheerful, very energetic, euphoric, overflowing with new ideas, and sometimes highly confident and charismatic, unlike full-blown mania; It is unknown to what degree hypomania symptoms can occur without a depressive component. Patients are unlikely to seek psychiatric treatment for hypomania alone. However, hypomania is associated with impulsiveness, recklessness, excessive spending, risky sexual activity, and other out-of-character behavior that the patients may regret following the conclusion of the mood episode. Hypomania can signal the beginning of a more severe manic episode, or it often directly precedes a depressive episode.

Hypomania can impair a person’s judgment due to too much confidence. And although it masquerades it’s self as happiness, It is important that hypomania is diagnosed because it is an expression of bipolar and can spiral into depression and carry a risk of suicide.