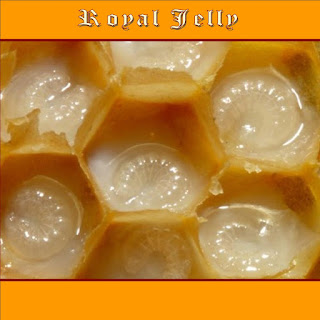 This Milky white substance that is secreted from glands (located in the worker bee heads) is Actually meant for Royalty. This is actually the special diet for their queen which sustains the life of the larvae for the first three days of life. This special diet is one of the things that seperates the queen from the workers. Not only is she larger than, her worker bee's, but she also lives a significantly longer life which is up to 6 yrs as opposed to 6 weeks.

Most believe that royal jelly is really a gem to have nutritionally. However; under labortory testing; This sweet serum is primarily made up of:


But it also contains:
Trace Minerals: